Showing posts from January, 2009
Show all

I'm here, not sure what is going on, but I've lost my blog-jo... (as in mojo).
I have every confidence that Ava (that's the name of my blog) and I will work this out.  She's a wonderful blog... I just think maybe we're going through something.
Afterall, I have been paying a lot more attention to my pink and leopard print girlfriend.  But I love her too.  I mean she doesn't hold all my thoughts and dreams like Ava, but it is always a party over there.
Not that Ava isn't social, she is.  Just not a few thousand hits a day social... and, she doesn't generate any income.  Maybe I am nothing more than a blog pimp.  Obsessed with delusions of blog grandeur.
Maybe it's not Ava or SITS at all.   Maybe it's my total lack of motivation.  I really haven't had much interesting going on.
I'd love any suggestions.  Blogerapy?  How do Ava and I get our groove back?
43 comments
Read more

Hi.
I know.
It's been for.ev.er.
I've missed you.
I've been having some fun.
Played BUNCO with tattoed minivan mom (jealous?).
Saw John Edwards talk to dead people (it was awesome.)
Tried to get back in time to meet up with her, but didn't make it. :(
And, I gave up my addiction to facebook.
Only to be replaced with an addiction to Webkinz.
Yes.  Webkinz.
My son asked me to help him earn some money.
Sure, I say.  I'll play a game or 2 while you do your homework.
Cash Cow 2.
Ugh.

Last night I saw Slum Dog Millionaire.  (yes, on a weeknight at 9:45.  it was heavenly.)
What a fantastic movie.  The story, the acting, the cinematography.
For those of you who don't know, the movie is about a young man from India's slums who goes on his country's version of "Who Wants to Be a Millionaire?"  He is answering all the questions correctly, and the police think he is cheating, as he has absolutely no formal education to speak of.
The answers have all "happened" to him.  Meaning, each answer he gets, he only knows because it happened to him personally.
And, wow.  The things that happened.
I won't spoil it for you, as I am hoping you take the time to see it.
There are parts of his childhood that will make you cry.  But don't let that deter you.  Some of the best films make us uncomfortable, as they put other people's reality in our face.
The movie got me thinking.
Something I have always wanted for my son is resiliency.
To be able to s…
72 comments
Read more 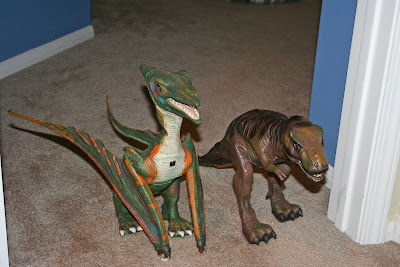 My son has been setting these guys up every morning.


Apparently, he is concerned about a potential intruder.

The best part is that the "Dino-Guards" are a more obvious solution to him then shutting the door.
Man, I love that kid. 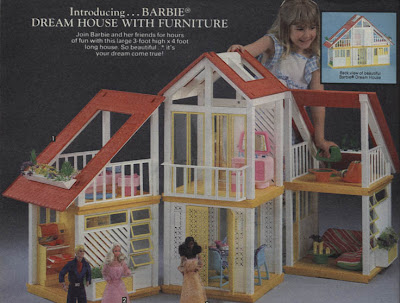 So I have always been someone who does things 100%.
When I played Barbies, I played for days.  Setting up my dream house in the living room with my sister and not cleaning up until I was completely over it.  Then, I moved on.
When we got our first Intellivision, I played "Pitfall" endlessly.
Seriously, that may still me the BEST video game ever created.
When I got internet access, same thing.  Hours of time.  I had this really WEIRD infatuation with Mark Macquire.
I would just look for all these sites about him online.
Let it be known, I am a total freak.
And you all know how I DEVOUR books.  I.Become.Obsessed.
When this blog started, I was crazy.  I would refresh my page hundreds of times and PRAY for comments.
I commit 100% and then I lose interest and move on.
Now, I love you all, and I do love my blog.  And, of course, SITS is part of my life.
But, something new and shiny has caught my eye and attention.
I swore I wouldn't get sucked in.
I put it off for YEARS.
Facebook ha…
56 comments
Read more

New Treats for a New Year. 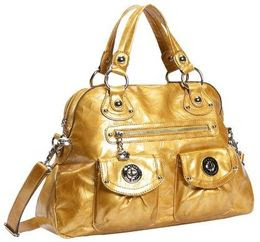 A new year needs a new bag right?
Well, around here, it's more like a new month needs a new bag, but that's another post.
This little sweetie caught my eye and I feel into deep and abiding lust.
And, it was under $100, which makes me really happy.
Don't think I'll use that longer strap to much, but it'll come in handy for traveling.... I'm going to Vegas AND Idaho this Spring.  And, probably Arizona.
And, of course, a new year needs a new duvet set right?
It's flannel.  I am going to go with crisp, white sheets.. the matching print they show it with is a little busy for my tastes, but I LOVE the green paisley.
Both are coming by mail.
They should be here shortly.
It'll be a little party.
What about you?
Any lovelies to bring in the new year?