Showing posts from September, 2009
Show all

Dear People Who Over Commercialize Brilliance and Ruin it: My name is Tiffany. I love to read. So much so, that I created a word to bestow upon those literary gems that leave you changed inside once you've read them. "Crackliture" What's Crackliture, you ask? Books like this one. The word Crackliture was created to describe a set of books I'm sure you have heard of by now- a little old series called, Twilight. I read Twilight before most of you knew or cared about Edward and Bella. And now, you can't sneeze without germing up someone who thinks THEY are the biggest fan. Fine- you take Twilight. But only on one condition. I keep Hunger Games. I read Hunger Games on October 7, 2008. Almost exactly a year ago. Again, at the time, it was just a book. A few weeks ago, I finished it's equally wonderful sequel, Catching Fire. Now it's becoming a phenomenon. I cannot STAND to see that fabulous story go down in commercialized
43 comments
Read more

Yes, She Is Alive.

So I've been back for a week. Still adjusting to life without room service. And a chocolate on my pillow. And giggling in the night. And reading six books at my leisure. And floating in the beautiful waters of Cozumel while Samuel brings me drink after drink after drink. Needless to say we had a fabulous time. And, since it was my turn to have Mona ride around with me, she got to cruise too. Here is a little video for your enjoyment. Yes, apparently, I say "apparently" a lot. Want to know more about Mona? Kathy's got the scoop here .
50 comments
Read more 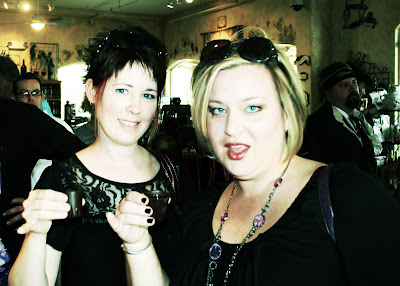 Well ladies. I am off. On a trip. With these two hookers. I know, I called them hookers. I'm feeling feisty. And, really excited. Oh, and this hooker will be with us too. More to come. Muuuuuhahahahahahahahahahaha.
40 comments
Read more
More posts